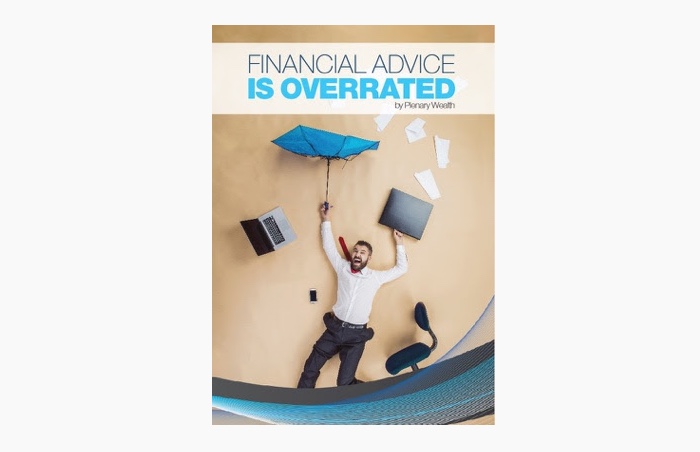 Strange title for an eBook, isn’t it? Especially when you consider it was written by a team of financial advisers.

But surely it’s what the public must be thinking. Why else would the industry be struggling to expand its reach?

But it all seems so misguided, doesn’t it? If we’re all focusing on the 20%, and trying to increase that number to 30%, what happens to everyone else? Who’s there to help them? The financial section of The Daily Telegraph? The team of “experts” at A Current Affair?

That’s why we wrote Financial Advice is Overrated —to help the 70% of Australians who don’t want our help. How can they become successful self-directed advisers in the age of robotic advisers, the Internet and self-appointed experts?

Financial Advice is Overrated (free to download here) talks about:

While I don’t want to spoil it for you, I do want to talk a bit about that second topic, “Being critical of whom you listen to”. In the eBook we focus on friends and family who, through luck or design, have become your financial beacon in life. But today I want to talk about this issue more broadly.

In 2012, Your Investment Property magazine named Kate and Matt Moloney (both in their early 20s) their “Investors of the Year”. The couple had been allowed to buy (by their bank) 16 mining town properties, and were earning more than half a million dollars a year in rental income.

Four years on, and they’re now more than $3.5 million in debt and facing bankruptcy.

To be honest, I’m not overly concerned about this couple’s misfortune. Unbridled greed and ego led them down this path, and so they have no-one to blame but themselves.

The people I am concerned about are the friends and family members who followed these “Investors of the Year” down the same hole, trusting them and their conversations around the barbecue. Why were these two considered undisputed expert in their field? Because they were successful once, twice, and then kept repeating the same steps until they went bust?

If only someone has passed on some advice. “You can look like a fool before the crash, selling too early and missing the last few years’ worth of growth. Or you can look like an even bigger fool after the crash, owning 16 worthless properties and being $3.5m in debt.”

I know where I’d rather be.

But your friends and family aren’t the only ones you need to question. You should also be questioning the advisers in your life (accountants, advisers, stock brokers, lawyers, mortgage brokers, etc.) that you turn to for advice. Not their qualifications, experience or ethics, but rather their temperament—especially in these volatile times.

An adviser is a leader, pure and simple. They need to lead through the good times and the bad. Do they guide you, reassure you and settle you down when the world seems to be crumbling around you? And do they temper your enthusiasm during the good times, and warn you that owning 16 properties in the same mining town may not be such a good idea?

As I said, things are volatile at the moment. And so, during these peaks and troughs, you need a leader who will stand behind their convictions rather than question them.

And if your adviser isn’t one of these leaders, then it may be time to lead yourself somewhere else.

Download your free copy of Financial Advice is Overrated, and find out whom you should be listening to.

So smart that you’re dumb with money? Why your intelligence could be keeping you broke